Report from the Chicagoland Slam!

The Pro light #43 Team headed to Chicago for rounds 3 and 4 hoping to build on their success and work on their short track setup.

Track conditions for qualifying were favorable but very different form the previous days testing. The team decided it was better to try different lines with a different approach to the truck setup and it took all three laps of qualifying to get comfortable in the truck with the changes. This approach gave us the worst qualifying position for the race nevertheless we learned were the #43 was fast. 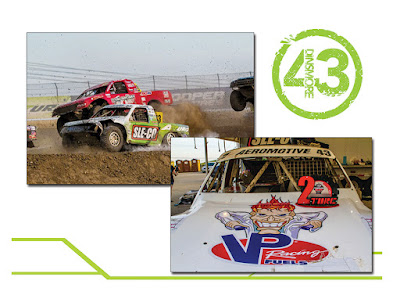 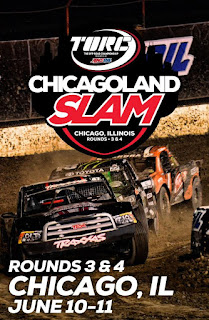 Starting dead last for Friday nights race, the #43 Ford powered Pro-Light was glued to the track and immediately started to advance to the front.

As the race progressed Travis drove clean through the pack and by the mandatory caution he had been saving the truck enough to make a hard charge through the field to challenge for the podium.

Multiple cautions in the second half kept the leaders close as Travis battled through more competitors putting him in 3rd place with a green white checkered to finish.

A hard fought battle in the remaining laps saw him advance past 3rd. When the checkered waved Travis had managed to position the Sle-Co, Atturo Tire, sponsored #43 on the podium in 2nd place.
The following day had the team fighting fuel issues causing an early finish to practice, the team worked hard and when the race came they were confident they had resolved the problem.
During the first half of the race Travis worked smart putting the #43 Pro Light with in striking distance again for the podium.

When the flag dropped on the restart the truck was on rails and advanced to the 4th position, as the race progressed the fuel issue emerged and the truck slowly fell of the pace.

Under powered on the last lap while running 6th Travis was forced off the track ending the race with heavy damage to the truck.

Posted by Cunningham at 9:50 AM